A Deep Bond and a Lasting Friendship 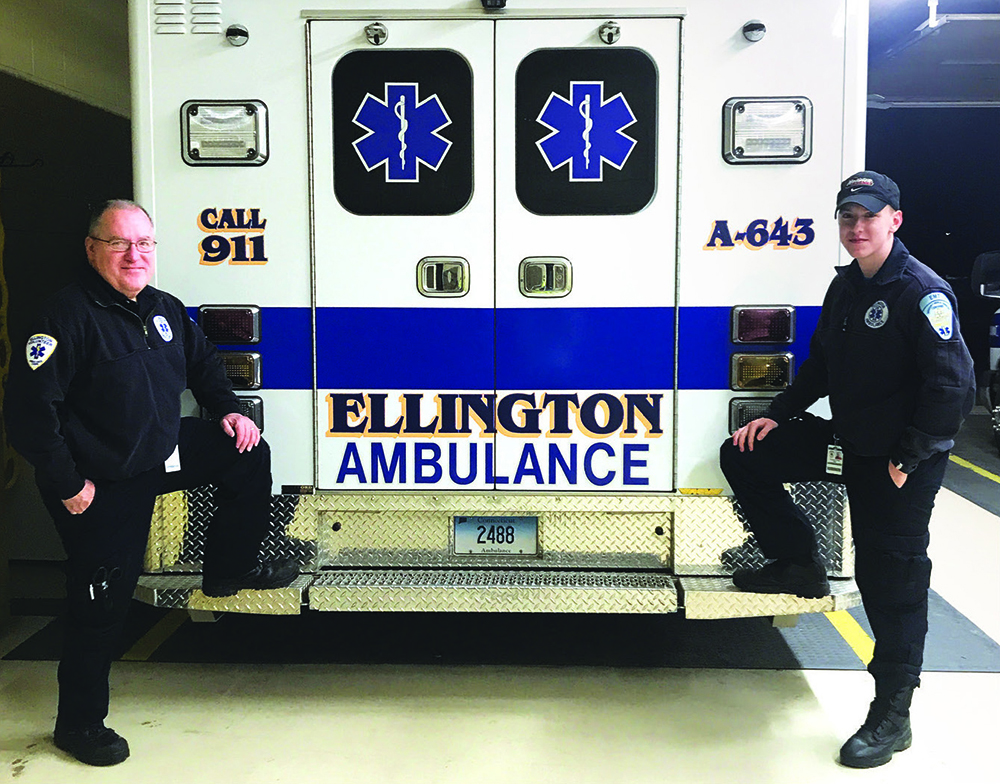 These two EMT partners—one a Baby Boomer and the other a Millennial—share the common bond of working hard to serve the community.

One of the best things about EMS is the people you meet. That’s true for Brendan Elliott and Ed Landsberg, who often ride side-by-side as partners for Ellington Volunteer Ambulance Corps in Ellington, Connecticut.

Brendan is a 19-year-old EMT, college student and the NAEMT Advocacy Coordinator for Connecticut. Ed, 62, became an EMT a couple of years ago after raising a family and spending four decades working in the printing business.

On the face of it, the younger and the older man didn’t have much in common, other than a commitment to community service and an appreciation for EMS. But through shared experiences, challenges and successes while answering calls for help, they forged a deep bond and a lasting friendship.

Ed and Brendan discussed what drew them to EMS, why they volunteer, how their intergenerational friendship has enriched both of their lives—and how Baby Boomers and Gen Z can learn to understand one another.

BRENDAN: I was an Eagle Scout. I liked giving back to my community and seeing the impact of those efforts. Serving the community is what EMS is all about. I became an EMT as a senior in high school.

ED: I always had a fascination with lights and sirens. But I got a degree in industrial technology/graphic arts and went to work in the print business. Eventually I joined CERT (Community Emergency Response Team), became a volunteer for the South Windsor Fire Department and a certified fire alarm installer for the American Red Cross. As my 60th birthday approached, I figured it was now or never. I enrolled in EMT school. I was the old guy in class. The first few weeks I thought, ‘What did I get myself into?’ It was a little intimidating, because it had been so long since I had been in school. But I got into the swing of it. I became an EMT in 2017. You hear a lot about Baby Boomers and Millennials/Gen Z having a hard time understanding one another.

How did you learn to work well together?

BRENDAN: We spent a lot of time together, and we just started talking about life and our families. Ed was easy to talk to. I learned a lot from him. Every shift, even if we had been up all night and had done 12-hour back-to-back shifts, he did a rig check. He taught me that it’s the little things that matter, and that small problems will add up to a bigger problem if you don’t deal with it. He always came to the station a half hour early to make sure he had time to check the truck and relieve the previous crew.

ED: Brendan was very enthusiastic and had a lot of energy. He wanted to learn. He was a real sponge. I saw Brendan and the other EMTs his age as people who were pursuing the same passion that I had; I just started much later. I didn’t have any preconceived notions about their generation. We are all just in it together. When I’m with them, I feel like I’m their age…then I look in the mirror.

Are there benefits to working with colleagues who are from different generations? BRENDAN: We both believed it was important to work through each situation, go step by step, and remember to breathe. But I’m a teenager. I didn’t have a lot of experience dealing with death. DOA calls, especially when they weren’t good deaths, were difficult for me. Ed was good at lightening things up after those calls, and reminding me of all of the good things I have in my life. Emergencies involving kids were tough for him. Those were the times that I would help to calm him down, and help him get through it.

ED: There were a couple of calls involving kids where my anxiety was quite a bit higher. The adrenaline got going. Brendan saw the patient as a patient, whereas I saw the patient as a baby that could have been mine. When I’m working with young EMTs, I appreciate their youthful energy. They haven’t gone through so many trials and tribulations in life, so I like that exuberance, the looking forward to the future. If I can help them at times by telling them about my experiences, I do it. But I try not to give too much advice. I mostly listen, and gently make a suggestion. I do think exposure to older people other than their parents helps younger people see the world in a different way. We head to the scene with the same anxiety and unknowns. We rely on each other and we trust each other. They know this of me and I know it of them. We become friends.

Both of you have full schedules outside of volunteering on an ambulance. What else do you do?

BRENDAN: I just finished my freshman year at Norwich University, the military college of Vermont. I’m a criminal justice major with a Spanish minor.

I plan to be a paramedic or a police officer. I also work for my college rescue squad and for Northfield Ambulance in Vermont.

ED: I still work full-time as a cost estimator for a print shop. But I volunteer as much as I can. We’re required to do about 30 hours a month, but I sign up for as much as I can. I try to put in 100 hours a month. I want to get as much experience as I can while I can still lift a patient safely. I told my wife, ‘If it ever gets to be too much, I’ll cut back.’ I’m away a lot of weekends and a lot of holidays. But so far, it’s been OK. My chief is 70 and he still goes on calls. I’ll go until my body tells me I can’t. I do realize patient safety comes first. If I can’t lift a patient safely, I will stop. I will become an instructor after my riding days are over.

You’re both NAEMT members and Brendan, you are NAEMT’s Advocacy Coordinator for Connecticut. Why is it important to be part of your professional association?

ED: You need to be aware of what’s going on at the legislative end of EMS, the governmental policies and attitudes regarding first responders. Not everybody wants to get involved with the politics, but it’s important to be aware. I joined NAEMT to keep on top of the issues.

BRENDAN: When I found out that as an Advocacy Coordinator I can be out there, talking to senators and representatives in Congress and actually having a voice in changing our EMS laws in Connecticut and nationally, I thought, ‘How many people my age get to do this, and have that responsibility?’ Now I realize how important lobbying for change is. In Connecticut, a bill just passed to provide worker’s comp for police, firefighters and parole officers dealing with PTSD. The bill excludes EMS. That is not acceptable. We are exposed to awful things and we should be entitled to the same care for mental health as other first responders. It’s an issue I’m working on now.

What do you like best about being in EMS?

BRENDAN: You’re going to someone’s worst day and you get to be that calm voice to relieve their stress. That’s your job. You hold hands. You talk to them about their life, their kids, their work to help get their mind off of whatever is going on. You’re not just there to deliver medical care. You’re there to make the situation better. It’s also the people you meet. I never expected I would be friends with Ed. I think I’m mature for my age, hopefully as my parents would want me to be. The bonds you make with people in EMS are really strong. Ed and my chief, Peter Hany, have been mentors to me. I’ve learned a lot from the older generation and it’s definitely made me a better person.

ED: When I drive home from a shift and I know we’ve helped someone, I smile all the way home. Recently, Brendan and I had a pretty serious heart attack patient who we were able to save. That was gratifying. But we’ve also had cardiac arrests where the patient didn’t make it, so then we try to be there for the family and preserve the dignity of their loved one. When you share an emergency experience with people, you bond. I like helping my community, and the camaraderie I have with my fellow first responders.

NAEMT is the nation’s largest and most diverse EMS membership organization. To join, visit naemt.org or call 800-34-NAEMT.