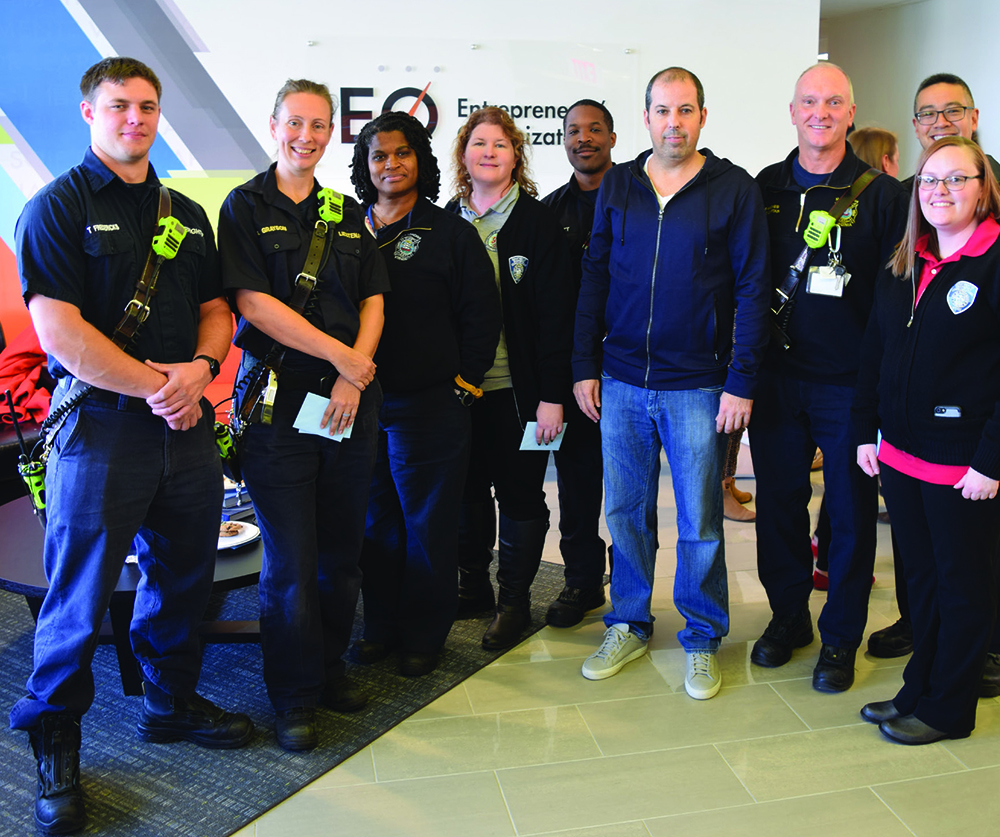 Russell Garvey shares a moment with the members of the Alexandria Fire Department and Department of Emergency Communications who came to his aid when he went into cardiac arrest at work.

The morning of October 15, 2019, had been a typical Tuesday at the headquarters of the Entrepreneurs’ Organization in Alexandria, Virginia. Stefan Jaeger, a vice president for the nonprofit, had spent the morning working at home before coming in at around 11 a.m. After exiting the elevator into the seventh floor lobby, he stopped into the restroom just outside the glass doors leading to the office. There he ran into Russell Garvey, who worked in the Entrepreneurs’ Organization finance division.

Stefan: I was asking Russell an accounting question and he collapsed into the corner. I first wondered whether he had fainted, but I soon realized that didn’t seem to be the case. My first instinct was to call 911 on my cell phone, but I decided to run out to the lobby and ask Rebecca [Rosario, the receptionist] to call 911, because she could better manage any questions regarding access [to the office]. Then I went back, still a bit in shock. I don’t have [first aid] training, and my initial thought was wondering whether moving a person is going to cause more harm than not. Not long afterward, Nick Canfield came in, and I told him what had happened.

Nick: I was going to the bathroom. Stefan’s my boss; he was in there coming toward the door, and he told me Russell passed out.

A former Peace Corps volunteer, Nick had given Stefan his two-weeks’ notice just days earlier: He was starting his own nonprofit and moving to Thailand. An adventurer, Nick had taken a National Outdoor Leadership School (NOLS) wilderness advanced first aid course in 2015, but he had never had to use most of his training.

Nick: I was so glad that I had that training because I wouldn’t have known what steps to take. I would’ve been a lot more flustered. Russell was basically tucked up behind a urinal; he had collapsed mid-sentence with Stefan. The original assumption was that he passed out. My first step was to lay him down on the floor so he wasn’t crumpled up in a weird position against the wall. I couldn’t feel any pulse but at the same time he’s kind of sort of breathing. I didn’t start CPR at that moment, I remembered that if someone’s breathing then at least their heart’s flowing somewhat. We just were like freaking out, at the same time it was very calm.

Meanwhile, Rebecca had dialed 911. “He’s breathing but he’s not responding,” she told Joanne Watson, the call-taker with the Alexandria Department of Emergency Communications. Still in the bathroom, Nick realized Russell wasn’t breathing adequately and he still couldn’t feel a pulse. He started chest compressions. Just a few blocks away, the crew of Alexandria Fire Department’s Engine 205 was in the station. Within a minute of Rebecca’s 911 call, the alarm sounded and they were dispatched for an unconscious person. They immediately began responding, with Medic 209 and an EMS supervisor not far behind. The crew, led by Lt. Rachel Grayson, arrived at the building and took the elevator to the seventh floor.

Rachel: We got up to the floor and were told the person was actually breathing. We walked in [the bathroom] and turned the corner and saw CPR was being performed.

Nick: That five to 10 minutes we were in there [be-fore the fire department arrived], was the longest time. When they got there, I stuffed myself back in the stall just to get out of the way because there’s like 80 people packed in the bathroom, and at that point that’s where it became real; I realized he’s in trouble.

Firefighter/Paramedic Tyler Fredericks was also on Engine 205. The crew immediately initiated high-performance CPR and placed Russell on the cardiac monitor.

Tyler: The first five rhythm checks at the two-minute marks were shockable rhythms. We shocked at 360 [joules] for the first one, and 720 thereafter.

The medic unit and EMS supervisor arrived, with the operational medical director who happened to be riding along. Karen Lopez, one of the paramedics on the ambulance, had recently submitted her paperwork to retire after nearly 20 years with the department. She had about a month left.

Karen: I can’t really remember what happened in what order. His rhythm kept changing and we were like, are you kidding us? He’s 44, he has quite a fighting chance so let’s give it to him. The team performed CPR, defibrillated and administered epinephrine for nearly an hour. Finally, an organized heart rhythm on the monitor’s screen was matched by a palpable pulse.

Karen: I said, ‘Does he look like he’s biting that [oropharyngeal] airway?’ Sure enough, he’s literally fighting for his own life.

Tyler: We didn’t actually move him until we had a stable pulse for about 10 minutes. It wasn’t a big rush to get him to the hospital because it was more controlled where we were. We made sure every-thing was set. We drew up one or two extra epis just to have it ready in case we had to go back down that road.

At this point, they had cracked open the medication kits from the engine, the ambulance and the EMS supervisor’s vehicle and were nearly out of epinephrine. They had performed a needle decompression to relieve a possible pneumothorax, possibly caused by the CPR. And they had intubated Russell and sedated him. Even though he’d been down for a long time, they felt hopeful about his chances for recovery.

Karen: We commented several times how much this guy was fighting.

Stefan: I was definitely fearful that it would probably not end well; we didn’t know how much blood his brain was getting.

But only a few days later, Russell decided he had enough. First, he squeezed his brother’s hand. Soon after, he was yanking the tube out of his throat.

Russell: I was like, what the hell is going on here? Why am I in the hospital?

A few days after his cardiac arrest, Russell celebrated his 45th birthday in the hospital with his family, including his then seven-year-old and four-year-old sons. He was also able to enjoy watching his team, the Washington Nationals, win the World Series. Several of his colleagues came to visit, each reporting that he was right back to making the same wry jokes he’d been making the morning he collapsed.

Nick: I got the heartfelt thanks from his wife. With him, basically we just talked, messed around. I said, ‘Listen buddy, you only get one time. I ain’t gonna do this again.’ He knows how lucky he is. He knows the pieces kind of played right for him. A week ago he was purple on this bathroom floor. Now he’s back to his old self.

He came home just two weeks after he had collapsed. He was tired, and his arm was sore and in a sling after having a defibrillator implanted just below his left shoulder. He planned on returning to the golf course, basketball court and weight room as soon as doctors gave him the okay.

Russell: I have no memory loss, no brain damage.

Although she’s run quite a few cardiac arrests in more than 20 years in EMS, this one will be memorable to Karen because it was one of her last and for a few other reasons, including the automatic urinal that kept flushing as well as Nick emerging from the stall after the crew had been on scene for several minutes without realizing he had tucked himself there to get out of the way. Getting the chance to meet Russell, his wife and his parents a few weeks later at a ceremony at his office will also be a memory Karen takes with her.

Karen: It was good to see him, great to see his family, probably did my heart some good. One of the things I wanted to make sure was that I wasn’t leaving with any bitterness. I still love my job. it’s just time for me to leave.

At the event, Russell had a chance to thank many of the people who helped him: colleagues from work, the telecommunicator who took the 911 call, the firefighters and paramedics who helped him.

Russell: It was a bit surreal. It still seems weird to me that this happened because I don’t remember it and because I thought I was healthy. When I hear the normal protocols, they work on you a half hour… and they did 90 minutes. I wouldn’t want my kids not to have a dad.

Tyler: It’s always nice to actually see your patients after, especially in a much healthier condition. It’s nice to see that what we do actually matters.

Rachel: He had Thanksgiving dinner with his family because we didn’t stop. Which is pretty cool.